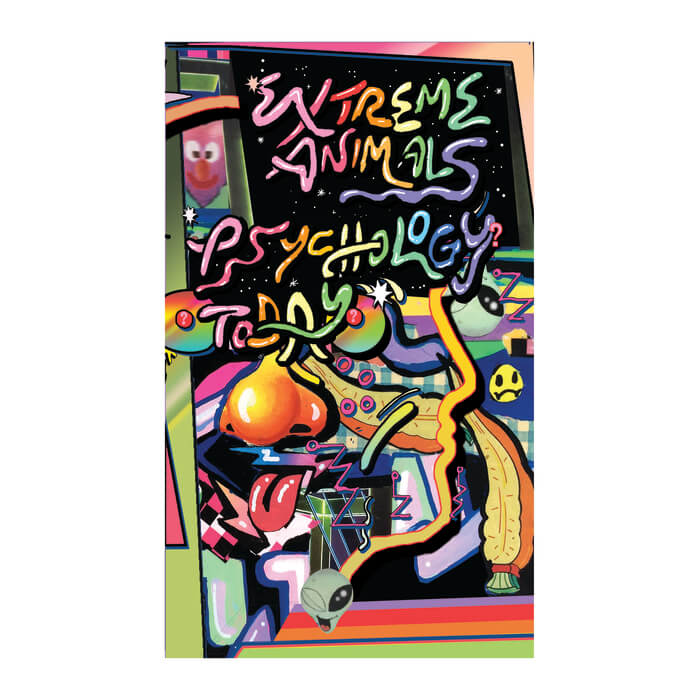 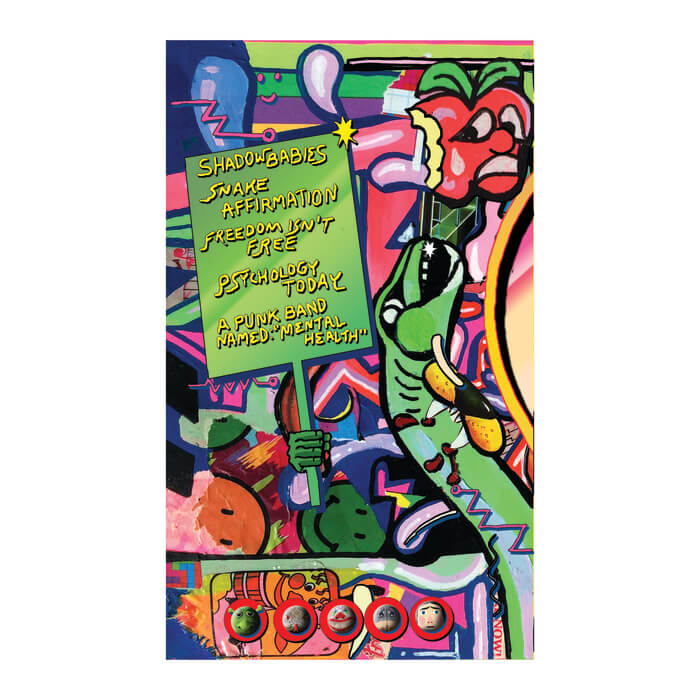 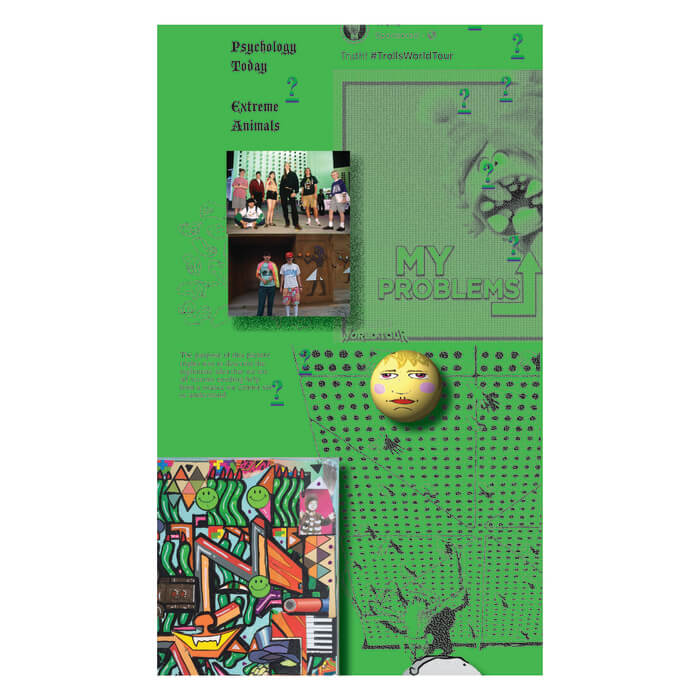 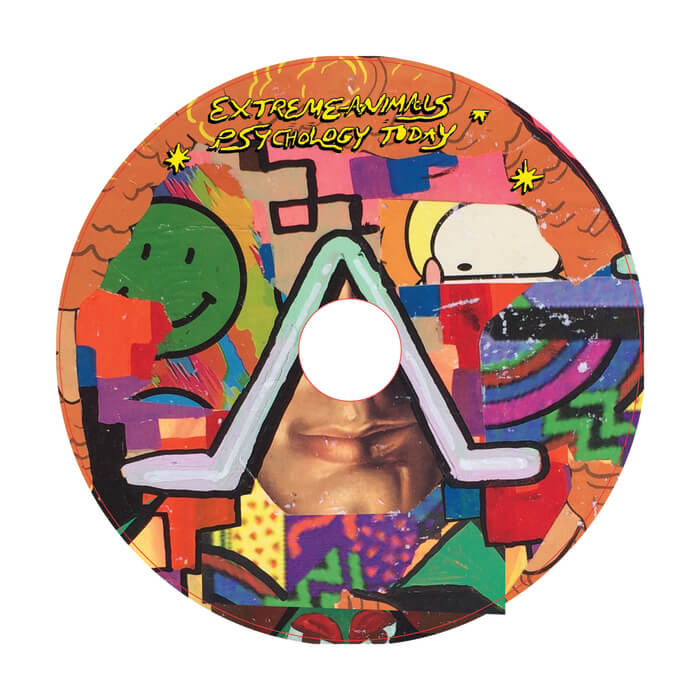 A group of children, in a found footage fragment I’ll armchair carbon-date to the late 1980s, sit slack-jawed and prone in front of a television. The flickering of the cathode ray bathes their faces in an angelic white light. They’re in jammies, piled together, lulled into a stupor at the eleventh hour of a slumber party in the basement of whoever’s mom and dad gives them unlimited screen time. The TV unfurls an endless auto-generating playlist of videos. Each has a wordy title rammed with keywords, a nod to the algorithmically-cued, computer-generated nightmare fuel that populates the darker waters of children’s YouTube. They flutter and decay at unimaginable speeds. It can only be an Extreme Animals joint.

The writer James Bridle, in his 2017 essay “Something is wrong on the internet,” framed the disturbing videos common on children’s YouTube as the inevitable, sinister consequence of a system designed to hook viewers and hold them in an endless daisy-chain of video content. Bad actors exploit the algorithms’ relentless optimization to create nonsensical horrors tailored to kids’ viewing habits—Peppa Pig gets tortured at the dentist, Elsa from Frozen gets beheaded by Shrek—but the system is complicit. Autoplay is a spell that ensnares us all. It gets weirder the farther afield we get. In its grim optimization, it traumatizes children and decohere adults from consensus reality. It plunges us into the heart of darkness.

In Extreme Animals’ “Psychology Today,” the algorithm, blessedly, takes us elsewhere. The kids at the slumber party are watching a manic interleaving of images culled from early-2000s anti-drug PSAs, zero-view YouTubes from the platform’s most un-Facebooked corners, found footage of garage emo bands, daytime TV ads from the ‘80s and ‘90s, and abject stock renderings of characters like Shrek and the Joker. Anarchy prevails—children covered in paint stand defiant against parental authority in suburban bathrooms, a decapitated snake, running on pure electrochemical reflex, bites its own twitching body, crows mass ominously over a McDonalds—but this found footage is culled from corners of the internet that still feel largely wholesome. They’re more verité cinema than viral capitalism. A compilation of babies who are afraid of their own shadows, in particular, is a longtime Extreme Animals muse.

In the ‘80s, when our parents said cartoons would “rot our brains” they were just worried about form and content—bright lights and colors, violence and vapidity—not distribution. It largely didn’t occur to them to be concerned about how we watched, or what we watched next. TV was on rails, selling us the usual stuff: cereal, toys, cars, beer. Cartoons didn’t rot our brains, but they did imprint us with keyframes of shared cultural nostalgia. They marked us, and those markings constitute the psychometric profile that advertisers use to stalk us through cyberspace. The images themselves were never the source of the rot. They’re just the carrier wave. It’s the way surveillance platforms exploit our unquestioning credulity of those images to send us into the clickhole and pump us dry.

It’s a kind of reverse magic. The more we watch, the less we see. “Psychology Today” is full of monsters and witches, ogres and demons. Green hags with hot pink claws pull the strings, playing Finger Family with our heads. Occasionally the spell breaks, and we see a quivering figure in a cave. Maybe he’s us. He’s riveted by the shadows against the wall. He too is being watched. Over his shoulder looms a monstrous eyeball. It’s REALITY. Plato’s Cave is sealed shut. We can’t get past the ocular golem we rolled into the opening to protect ourselves from the awkwardness of being alive, from all the unanswerable questions and ambiguities of life. In the monster’s eye, everything is interchangeable and nothing matters. I can’t say that I know, precisely, what constitutes reality. Philip K. Dick said it was that which, when you ignore it, doesn’t go away. I doubt he was thinking of platforms whose power draws from our indifference. The more we ignore them, the more powerful they become. The more real.

So the eye watches us as we watch its shadows. Countless images surface from its iris, images that purport to show us the world as it is, and the world as it was. But the world-as-it-was is just a televisual memory, and the-world-as-it-is is on the brink of collapse, broken down by the sheer weight of our images and the heat we generate cooking them. What is there to do? Our cave-dweller pries the eyeball aside. Behind its monstrous gaze, he glimpses salvation, fleetingly—it’s called music. It looks small, too small to save us.  But I’m glad there’s something there.

**International option is for shipping charge, not format. All of our VHS are NTSC region**